A couple of weeks ago, I mentioned that life as a writer is filled with ups and downs and one of the hardest things to do is to keep writing even when you find yourself meandering through a proverbial valley of self-doubt.

In the world of computers and technology, the term down time refers to the time during which the machine is unavailable for use (the time in which it’s down, duh). The definition of down time for a writer, however, is just a little different.

When I say down time, I’m not talking about the time when I’m not writing (or dreaming up something to write about). No, I mean the times in between the thrilling mile markers as a writer. There are some amazing (like, AH-MAZING!) high points as a writer—the times when you finish each draft, when your beta readers come back with wonderful reviews (or at least with critiques of things you can easily fix), when you get a full manuscript request from the agent you’re dying to work with, or when you pitch to an agent in person and leave a writer’s conference oozing with all the confidence of Superman.

But in between those various highs, there are miserable trenches of lows during which you begin to wonder if you should even call yourself a writer at all. There aren’t many professions in this world where you don’t at least get some regular feedback on how you’re performing. Almost every company or organization out there generally engages in yearly performance reviews to let an employee know how good, bad, or mediocre their work actually is.

I’ve always felt that performance reviews are a critical part of any job. Even if they don’t result in overflowing praise, they help to shape and guide an employee in how he or she can work on harder in the coming year. Writers, on the whole, don’t have this option. I imagine if they did, the conversation would go something like this.

Boss: Jim, your first draft quality has really taken a dive since your book was published last year. I’m disappointed.

Boss: Oh, and also, your characters are flat, no arcs at all, your plot is riddled with holes, and your ending is rushed. And what. is with. the purple prose? But, at the very least, your focus on the long game is phenomenal and that’s a step in the right direction. I think you’ll get there eventually, Jim.

And even though the boss is hard on Jim (okay, so Jim has basically just been told that everything is wrong), he’s given Jim hope that there’s something to look forward to.

In actuality, new writers don’t get any confirmation that they are on the right track. Once you’ve got an agent on your side, you’ve at least got someone to bounce thoughts off of, someone to check in with, and someone who will warn you before you’ve gone too far up the creek without a paddle… But until then, you’re on your own.

And that leads to some serious down moments. The best recommendation I can give to new writers is to connect with other new writers. These are your people. These are the folks who will lift you up when you are in the darkest moments of self-doubt, the ones who will reaffirm that you haven’t written “utter crap” and that you are a talented writer. They are your support and they are absolutely essential to maintaining your sanity on your writing journey.

I’ve got a couple of online groups I belong to, but far and away, my saving grace has been my good friend and new author, Jean Grant. (Yes, the same Jean from my last post!) Here are a few snippets of our lamenting. We do this at least once a week.

(At the very least.) 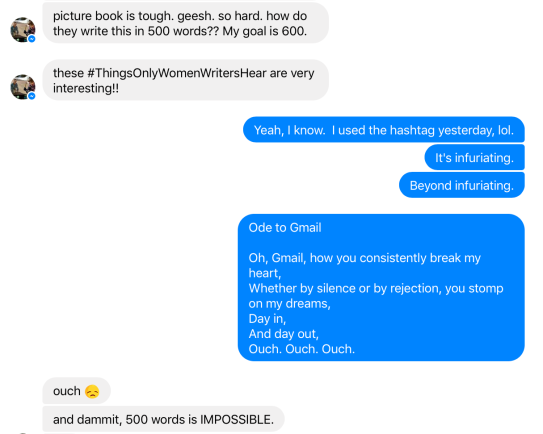 So if you haven’t found a group yet, find one. Connect with other writers. Engage and know you aren’t alone. It’s the only way to get through the down time with your sanity still intact.

This site uses Akismet to reduce spam. Learn how your comment data is processed.