Okay, okay, so we’re a little more than 6 months into the year. Perhaps I was being a tad ambitious about reading 12 Twitter friends’ books in a year, especially when my own book launched a few months ago and I’ve had several signings and events and I’m still trying to keep up on recommended reading from friends and coworkers (which will bring me to 12 Books—Month 7 in a few short weeks).

Without further ado, I bring to you Planetside by Michael Mammay. It’s been a long time since I’ve picked up a science fiction novel. I veer more toward fantasy. What can I say? I’m a sucker for magic and dragons, and I tend to get a little lost when it comes to hard sci fi. 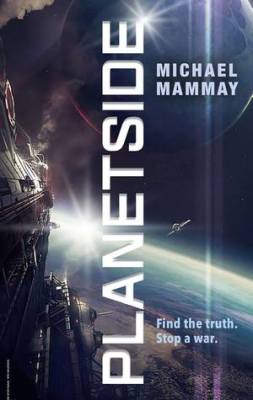 That said, there was no way to get lost in Planetside. (I mean, there is, but that’s getting lost in the very best of ways.) I’m not even sure I would classify it as hard science fiction. Does it take place in space? Yes. Are there space stations, and aliens, and hostile planet takeovers? Yes, yes, and yes. Okay, I guess it really is hard sci-fi. But that’s difficult to remember that when the entire novel is wrapped up in what’s essentially a murder-mystery. (Missing person mystery? Can it be a murder mystery if there’s no body?)

I must say one of the most surprising aspects of this book…was finding out that the protagonist wasn’t a misogynistic jerk.

What’s that, you say? Why should that be surprising? Well, I’ve read a number of mystery-thriller novels with a smart-ass male protagonist who’s on the tail-end of his career, but somehow manages to solve an incredibly difficult case no one else possibly could have cracked while snagging a beautiful woman half his age, while also admiring eight other women’s asses in the entire length of the novel. It gets old. Really old. Is it a male fantasy thing? Probably. But I like a good mystery, too, and I love a smart-ass protagonist! (Still…he doesn’t need to be checking out every woman’s breasts or rear throughout the entirety of the book!)

Guess what? Mammay not only doesn’t have a misogynist as his main character, but he also HAS MANY WOMEN CHARACTERS ALL THROUGHOUT THE BOOK AND YES I AM SHOUTING BECAUSE I AM HAPPY. Do you know how annoying it is to see 90% of the cast as male in just about any random book (especially science fiction)? Not only is the main character in Planetside happily married and looking forward to retirement, but he also happens to interact with dozens of female officers, soldiers, and hospital personnel throughout the book, all of which is done without a bat of the eyelashes. Women. Treated as equals. It’s a novel concept. (See what I did there? Novel concept.)

All in all, this book was stellar. My only hitch is in the ending because now I have to pick up Spaceside… Well-played, Mammay. Well-played.