So a little thing happened today.

A Thousand Years to Wait was listed as an Award-Winning Finalist in the Fiction: Fantasy category of the 2019 Best Book Awards sponsored by American Book Fest! 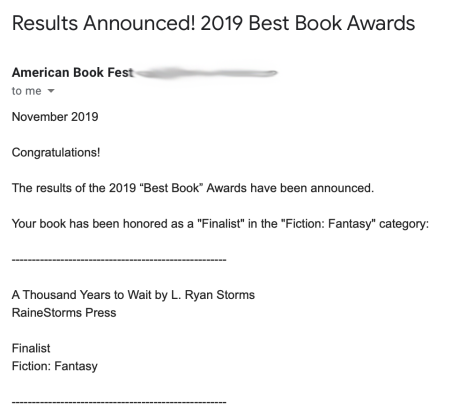 So what does one do on the day their very first book launches into the universe? Here’s a list so you can see how incredibly *unusual* today really is.

And if we’re really in the mood to celebrate this evening, we just might go for cupcakes… I’ll keep you posted.

My point? My dear friends, launch days aren’t really any different than any other day. There’s still plenty of poop to clean up and lots of words to write.

But am I celebrating anyway? Yes. Yes, I am.

9:28 p.m. update: Celebratory gourmet cupcakes were had. They were prettier before they were accidentally smashed by 13 y.o. in the car. Tasted yummy anyway.

A few months ago, I posted about two very exciting things. The first, I elaborated in my post—I got to see my name in print in the byline of an article on the front page. The second? Well, I kept the second a secret. But it’s been long enough and I’m ready to share. Without further ado, I give you…

My debut Young Adult Fantasy titled A THOUSAND YEARS TO WAIT is scheduled for publication in April. That’s right. On April 30th, 2019, you’ll be able to purchase a copy of my book.

Can you die from holding in good news? Asking for a friend. #ItsMe #Imthefriend pic.twitter.com/BXgjWgHqFn

Stay tuned for additional teasers, including reviews, excerpts, and cover art in the coming months!

Summary for A THOUSAND YEARS TO WAIT

Prophecies are meant to unfold on their own—they can’t be forced into fruition. Or can they? When a war-torn kingdom is on the cusp of falling to a usurping general, a young healer who doesn’t believe in magic is called upon to help a prophecy transpire. She must embrace the magic…or lose the ones she loves.

A large part of succeeding as a writer boils down to your willingness to put in the time. Can you accept sitting at a desk, dreaming up worlds, typing (or scribbling) the words, and getting it done? The answer to these questions has always been a resounding yes for me, but I tend to fail when it comes to putting in the face time.

I did just that this weekend. I put in the face time and met dozens of wonderful writers and agents and editors at the Writer’s Digest Conference in NYC. It was fabulous. I participated in PitchSlam, in which authors are given one hour to pitch as many agents as they can in three-minute segments. (Truly, it’s any introvert’s nightmare.)

But you know what? While I was nervous going into my first pitch, it melted away quickly. Why? Because I discovered something as I delved into conversation with these agents. I found myself admitting something surprising. Out loud.

I love my book. I love the characters. I love the plot. I love the interactions and the quirks and the personalities. It was a fun book to write and I had fun writing it! And when you enjoy your story, I think it shows. You start to enjoy talking about it and telling people why it’s something they’ll want to read…which makes it a lot easier to pitch.

Proof? I pitched 6 agents and all 6 made requests for partial manuscripts (requested lengths varied). This may or may not result in progress moving forward, but that’s not the point. The point? When you love your work, it shows.

Writers. Friends. I have one piece of advice for you. LOVE YOUR WORK. It’s yours. You wrote it because you loved it.

I read. I read a lot. Even when the weather (finally) changes and a warm breeze replaces the arctic winds of winter, I’m no less likely to be found lounging on a couch, a book in hand. The only difference is that I probably have the windows open.

I like to read a little bit of everything, but of all the genres and all the age categories, I find Young Adult Fantasy to be my favorite. Why? (TL:DR? Scroll to the bottom of the page.)

Oh, let me count the ways.

YA Fantasy worlds & world-building: I am an enormous geek when it comes to the natural world around us. Biology is magic and the sheer diversity of it is staggering. Someone I follow on Twitter recently tweeted about David Attenborough and it reminded me of how much he once inspired my love of the natural world. (As did many of my college professors, but they don’t narrate specials on Animal Planet or National Geographic, so…) For me, YA Fantasy has taken my love of nature one step further. A good YA Fantasy draws you into a new and unfamiliar alien landscape, yet makes it seem as familiar as our own Earth.

World-building in any genre is important, but in YA Fantasy, it’s a crucial element in order to create a new land that’s both foreign and familiar at the same time. It’s a skill good fantasy authors master early. I don’t just want to read about the birds singing in the trees. I want to know which birds in which trees. Paint their feathers for me and make the fronds of the trees filter the alien sunlight onto a dirt floor that’s littered with forest debris. Where do the birds nest? What’s their song like? Do the birds eat nuts and berries or do they steal the eggs of others’ young right from their nests? Are there myths surrounding the birds? What kind of stories have people told about them? I want to breathe it all in as though I’m really there, and that’s one of the reasons YA Fantasy is my favorite. The lush world-building just can’t be beat and there is literally no limit to the number of fantastical settings and creatures that can be created.

YA Fantasy protagonists: When I was a teen, I was quiet, soft-spoken in crowds, and always pictured myself as a real-life sidekick, certainly not a kickass dragon-riding protagonist who could master the forces of magic and shape the future of an alien world. As a teen, reading YA Fantasy allowed me to escape into a world where not only was I a main character (or following along in the life of one), but I was a confident one, even when faced with danger. It was exhilarating. It’s a way to open teen minds without feeling the pressure of the very real dangers of today’s world.

Plus, let’s not forget how much fun being a teenager really is. In real life? Pimples, exams, puberty, peer pressure, driver’s license test, college choices (“What do you want to do? What do you want to be? Decide now. Now, now!”)… The list goes on and on, but YA Fantasy pushes all that aside and focuses on giving teens choices that maybe aren’t so mundane. Instead of asking teens to face the world as it stands around them, YA Fantasy asks teens to face a new world where they can safely explore life and death choices and empathize with characters who face decisions that are much more terrifying than their own real-life ones!

YA Fantasy protagonists are a mix of grit and insecurity (much like real-life teens) and what makes them worth following is how they grow as characters. Character arcs in YA Fantasy are beyond fun to watch! Good luck trying to get a 25-year-old protagonist to make the kind of progress you can make with a 16-year-old in half the time.

YA Fantasy Influence: Perhaps the best reason of all to read YA Fantasy? To see how it has shaped teenagers in today’s world. The kids from Parkland, FL took everyone by storm when they refused to let a culture of gun violence remain the norm. But why were they so quick to speak out? What made their experience different from so many other incidents that had come before? These kids were raised on a steady diet of book and movie series like Harry Potter and The Hunger Games. They’ve seen teens who look and act just like them as protagonists in their own lives. They’ve seen characters make a difference, defeat ‘evil,’ and come out better on the other side. YA Fantasy is so much more than teens saving their worlds. It gives today’s real world teens a voice and the hope that they, too, might change their world for good. I can’t think of a more noble reason to jump into the next YA Fantasy…

YA Fantasy is a genre everyone should read and it’s not just for tweens and teens to enjoy. Ready to delve in? Need a place to start? Try these:

An Ember in the Ashes by Sabaa Tahir

Children of Blood and Bone by Tomi Adeyemi

The Forgetting by Sharon Cameron 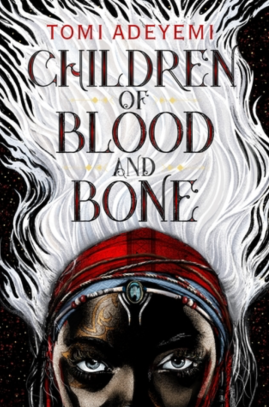